The Saura Gorge sits on the coast of the Caspian Sea and contains an eponymous lake. This freshwater lake, surrounded by steep walls of the canyon, is fed by numerous underground streams. Lake Saura is inhabited by pond turtles and is sometimes called Turtle Lake or Cherepashiye Lake.

Lake Saura in legends and myths

The Saura Gorge is associated with Beket Ata, a prominent Sufi scholar and philosopher. According to legend, he and other scholars once decided to figure out whose faith was stronger. Beket Ata suggested that whoever gets to the Saura Gorge first has the strongest faith. The scholars agreed and set off. When they arrived in the gorge, they saw Beket Ata sitting on the lake’s shore. Bewildered, the scholars asked Becket Ata how he had managed to get there so quickly. Beket Ata replied: “I flew here on the black wings of your unbelief.” Then the scholars went down to the lake and swam in it washing away their unbelief.

By the way, Beket Ata Underground Mosque is located not far from the lake. This mosque is an important pilgrimage site. It also draws tourists who wish to marvel at the unique 200-year-old underground mosque.

Lake Saura doesn’t boast rich wildlife. It is home to dragonflies, crustaceans, predaceous diving beetles, and toads. The lake’s most interesting inhabitants are relic pond turtles which reach the size of 30 cm (13 inches). These turtles have long tails and yellow blotches on their black shells. They usually resurface every 20 minutes to breathe.

After wintering, they appear in late April or early May. Mating season starts at the end of May. The turtles lay their eggs on the shore; usually three clutches of eight eggs every year. Young turtles, the size of a coin, hatch in August-September. Most newly hatched turtles hide deep underground, hibernate there, and resurface in spring.

Steppe turtles that can live up to 40 years are also known to be living in the Saura Gorge. Unfortunately, many turtles die in their first years of life.

Saura is a stopover site for such migratory birds as herons, waders, and ducks. Swifts, eagle owls, barn swallows, and desert crows often nest on the rocks. 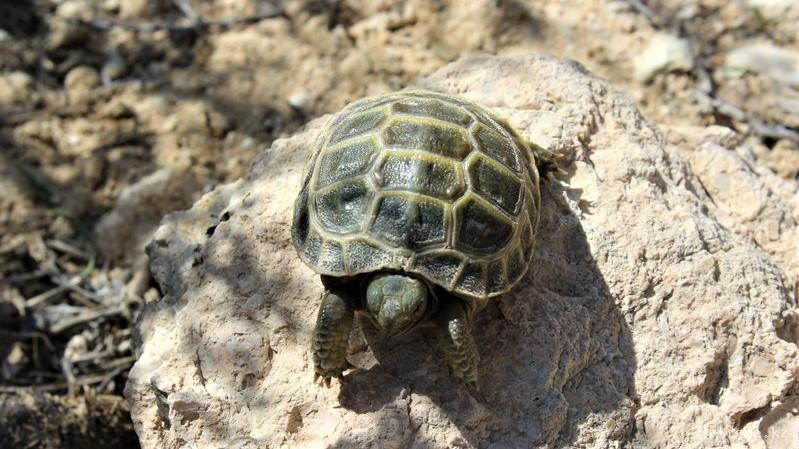 At the entrance to Saura there is a sign with information about the area in three languages. In 2017, gazebos and a public toilet were built near the gorge.

If you drive a little further from the lake, you can see the ruined fortress of the Bronze Age. Excavations revealed a burial of a woman, clay dishes, copper ore, beads, and flint stones. Presumably, the fortress was at its prime during the existence of the Silk Road.

During World War II, there was a torpedo factory near Lake Saura. The plant produced torpedoes for Soviet M-class submarines. Also, the Kalmyk Fish Trust, the Kizlyar Fish Station, and the Luhansk “Red Seaman” Fish Cannery were evacuated there from the USSR’s regions most affected by the war.

How to get there?

Mangystau Region is Kazakhstan’s most remote part that contains vast uninhabited deserts. It is advised to thoroughly plan a trip to this region. Mangystau can be reached from major cities like Almaty, Nur-Sultan, or Shymkent by plane or train. A car is a good option for experienced drivers. However, it will take much more time, since there is no direct route to Aktau. You will need to drive to the cities of Aktobe, Uralsk, or Atyrau and then to Aktau. It is recommended to drive an SUV because many roads are unpaved.

From the city of Aktau, follow the Aktau-Fort Shevchenko highway. After 83 km (51.6 mi) there will be a turn towards the coast of the Caspian Sea. The road takes about 1.5 hours.

Other tourist destinations near Lake Saura

This is the biggest salt pan in Mangystau that offers an amazing...

This is a seaport located on the eastern coast of the Caspian Se...