The yurt is an ancient dwelling of nomadic tribes, which is easy to assemble and transport, an effective tool for traveling, comfortable and unique home. The whole life of Kazakhs was connected with it. It is a symbol of Kazakhstan culture. It occupied a special place in everyday life. The word “yurt” can be translated as a homeland or nation.

The yurt is not just a dwelling, it is a symbol of a special ideology, life without corners, life without restrictions, life in harmony with nature. Yurt is a great achievement of mankind, which deserves our careful attitude, and should not become a thing of the past!

A demonstrative example of a special way of life of nomads is the fact that for almost a millennium there were no windows in the yurt, despite the fact that technologically it is quite a simple task. Think, how much you have to be a whole with this world to do not need a window! Not to try to unite your inner world with the outer world with the help of a window. This is simply not required, as they were not separated. And this is even though that a nomad had to be ready to meet an enemy every minute, and still, he didn’t see a need to look at the world through the window. The yurt is not a fortress — first of all, it is a house where no place for war.

Kazakh yurt consists of three wooden parts: grids “kerege”, the base; poles “uyk”, forming a dome; and a round hoop “shanyrak”, which is the top of the yurt, the ceiling window, and the exit for smoke. Shanyrak was a family heirloom, a symbol of the continuation of the family, and it is depicted on the Kazakhstan coat of arms. The assembled mechanism is covered with felt, protecting from wind, rain and snow, scorching sun, and dust.

In the center of the yurt, right under the shanyrak, there is a hearth on which the holder for the boiler is installed. At the very end of the yurt is the property of a nomadic family, and it is customary to meet guests here. 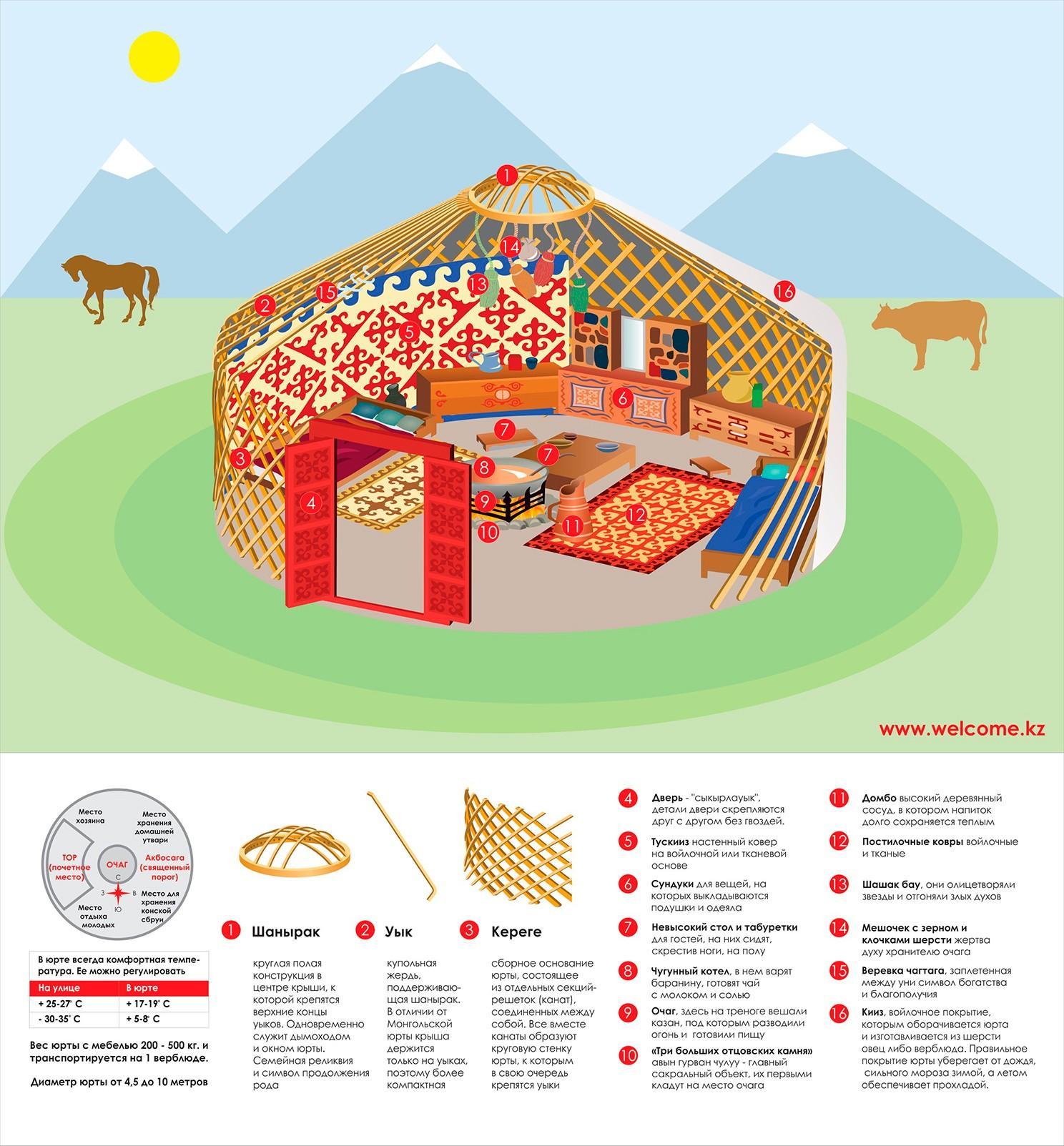 Turkic and Mongolian Types of Yurts

There are two main types of yurts, the mechanism of which slightly differs from each other. The Turkic type is used by Kazakhs, Kyrgyz, Turkmen, and the second type, Mongolian, is traditionally used by all other nomadic peoples. The main difference between Mongolian, Buryat, and Tuvan yurts is the wooden pillars that stand in the center of the yurt. They support the ceiling poles of the yurt, without them, the construction will not be reliable because of the straight shape of the ceiling poles (ueks). This design speeds up the installation of the yurt, but at the same time becomes more cumbersome and difficult to transport. The Turkic type of yurt differs by the curved roof poles, which are fastened to the walls (kerege) of the yurt. Thanks to this, the weight of the roof rests on the walls of the yurt, and the visual appearance is more elegant and harmonious. In addition, in the center of the yurt, there are no pillars and partitions.

In turn, Turkmen yurts have bivalve wooden doors. In Kazakh and Kyrgyz yurts, besides doors, a felt canopy is often used. Kazakh yurts are also lower than Kyrgyz yurts, due to the fact of using the yurt in the steppe, where the strongest winds are the most.

Origin of the Yurt

The prototype of the yurt was the huts of primitive people, later — the tents of nomads. There are two versions of the appearance of the yurt: in the XII-IX or in the VIII-V centuries BC, as confirmed by various rock drawings and manuscripts of ancestors. Some materials indicate the development of the yurt since the Mongol conquests of the XIII century, as well as information contained in Chinese, Central Asian, Iranian and Turkish miniatures.

Kazakhstan cherishes the preservation of unique flora and fauna....